Michael McCallum will depart from his normal dramatic narratives and lighter fare with his production of his next short ‘Reverb”. A moral story of conscience,  “Reverb” will be his first crack at sci-fi.

Always a big fan of sci-fi and Twilight Zone series, Michael will collaborate with talented writer Justin Muschong,  with whom he has worked previously on stories for “Handlebar,” “Lucky” “Confidence Of a Tall Man” and “Eskimo Brothers.”

MMM talked with Michael regarding this film project.

MMM Word has it that you are planning on creating a short sci-fi film. This would be a departure for you from your normal genre of film. Without giving too much away, what will the general story line of this film be?

“Reverb” is the next short film project from Rebel Pictures. A ‘Twilight Zone esque’ meets Tell-Tale Heart story of a guilty conscience of a man that is slowly unraveling after a hit and run accident.

MMM  Why did you decide to do a sci-fi film?

I’ve always loved Sci-Fi, especially the Twilight Zone. I like to do whatever the genre is that the story is taking me too. I’ve been intrigued with doing something in this vein, but it had to be the right story and budget to make that happen. I’ve seen far too many Michigan Sci-Fi projects with low budgets and people wearing Nike “in the future”. This story is present day and doable with the budget that we have for it.

MMM   Do you have an interest in science, or sci-fi in general?

I do. I’ve always been a huge Twilight Zone fan and Star Wars and Star Trek. There just wasn’t a story that I wanted to tell up to this point that was in this genre. I came up with this story and worked out the details with my talented writer collaborator, Justin Muschong. We’ve worked together previously on stories for “Handlebar,”” Lucky” and “Confidence Of a Tall Man.” I Directed a short of his, “Memento Mori” a few years ago. He’s great for me to bounce ideas off of and have him write out a screenplay, like we did for “Reverb” and “Confidence Of a Tall Man.” Sometimes it’s nice for me to have the words come from someone else other than myself and my sensibilities dialogue wise. Justin’s writing is fantastic as well so he makes it easy.

MMM   You have, apparently, already decided on a name for this story. How did you decide on this title?

The title of “Reverb” just hit me when I was working out the storyline. Sometimes titles just come to me. It made sense with the storyline of a guy who is being haunted by the same song everywhere he goes after this hit and run accident. It’s the song that was playing in the car when the accident happened.

MMM   What is your inspiration for this story?

I’m really not sure where the inspiration came from. I know I’ve been talking about this film and story with our lead actor, Richard Barnes II, for two years plus. I think it came from hearing this song by Johnnie Ray, “A Sinner Am I”, and working out a story around that. Sometimes stories just pop into my head or at least bits and pieces of them and then I just slowly work to add  to them. I really just get a tone in my mind at first and then keep going in that direction. 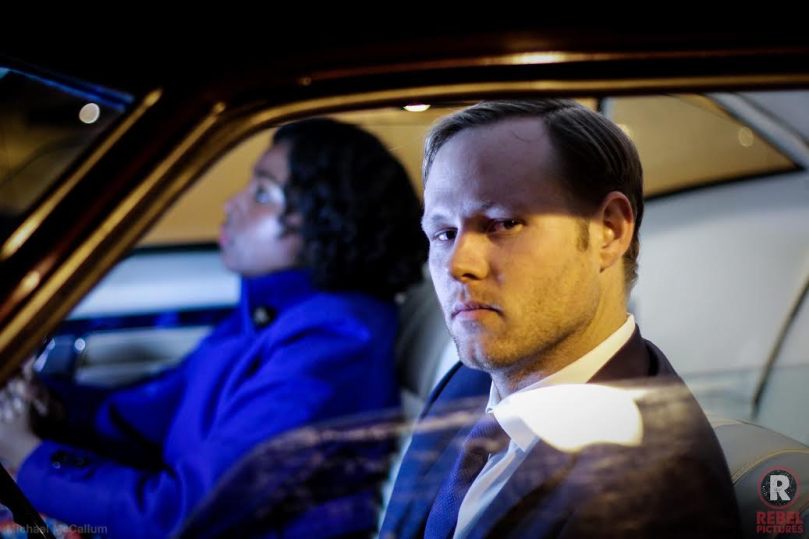 MMM   Have you already announced a call for cast and crew?
Yes. Our lead actors are cast and we only need extras in March when we resume filming. Richard Barnes II and Ginneh Thomas are the lead actors. I worked with Ginneh previously on Lucky Jay. The web series made through Grand Valley State University’s summer film program.

MMM    Will your father, William McCallum play a significant role in this short as he had in Buffalo?

No. My Father, Willam C. McCallum, isn’t in this film at all. Neither am I. I love working with him, but there just wasn’t a role for either of us. I go with my gut in casting and I also don’t force myself into every film I make. He is helping produce it though; he is always my rock through every film. I couldn’t do it without him.

MMM    Will this film be produced locally? By locally, I mean will it be filmed largely in the Lansing and outlying Lansing area? Or will you be going elsewhere to film?

We are shooting in Lansing and in Ferndale and Royal Oak. I’m excited to get out of the area and shoot in some other parts of Michigan that fit this story.

MMM   Have you selected a setting, or have one in mind?

We have a majority of locations locked in. Only a few small things are needed. It doesn’t take place anywhere in particular. No set city or town.

MMM   How soon do you think before this film is ready?

Well we shot some flashback scenes this past Sunday, Nov. 15th and will resume in March. So it will be some time. I’d look for it in 2017. It really depends on how much money and time we can do in post and how quickly that process can move. Just keep checking with MMM and Rebel Pictures on Facebook/Twitter and on our site: rebelpictures.net for more updates.