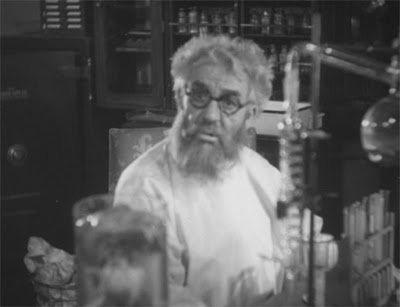 It was on this day in M(ichigan) M(ovie) H(istory),  January 31, 1875,  American actor, film director and, screenwriter Horace B. Carpenter was born in Grand Rapids, Michigan. A veteran of Selig two-reelers in the early 1910s, burly American character actor Carpenter came to the forefront after joining the Lasky Feature Play Company (later Paramount) in 1914.

For pioneering director Cecil B. DeMille, Carpenter played Spanish Ed in The Virginian (1914) and Jacques D’Arc in Joan the Woman (1916).  Carpenter struck out on this own and directed 15 of the cheapest Westerns and action melodramas ever produced between 1925 and 1934.

After the changeover to sound, Carpenter returned to acting exclusively to play his stock-in-trade, kindly fathers and ranchers in scores of B-Westerns  In 1934 he played Dr. Meinschultz in the exploitation thriller Maniac devouring a cat’s eye, an indiscretion which his career survived somewhat intact.

Carpenter appeared in a total of  334 films between 1914 and 1946 and continued to play scores of supporting roles and bit parts right up to his death of a heart attack.